Home » Vegan Diabetic Recipes » When you have constipation, bloating and gas despite being a plant based vegan (plus my huge balloon belly photos)

When you have constipation, bloating and gas despite being a plant based vegan (plus my huge balloon belly photos)

Pooping was something I didn’t think much about… until I stopped doing it.

Late last year I shared that I was diagnosed with an H Pylori infection, a serious bacterial infection in the stomach that causes ulcers and can lead to cancer if untreated.

You can read my original post here, or watch my video on Instagram here. I also posted an update with the specific diet/antibiotic protocol I followed here.

Eradicating my H pylori infection eliminated several of my symptoms (persistent stomach aches, severe abdominal pain (especially with an empty stomach), black/tarry stools, feeling like I have the flu, skin itchiness, among others).

However, I was still having a GIGANTIC HUGE BALLOON BELLY (severe bloating and distension), persistent constipation, a general inability to empty my bowels, plus nausea, low back pain, and swelling (particularly in my hips, low back, and thighs) if I was constipated for multiple days after treatment.

I’m not exaggerating, see for yourself: 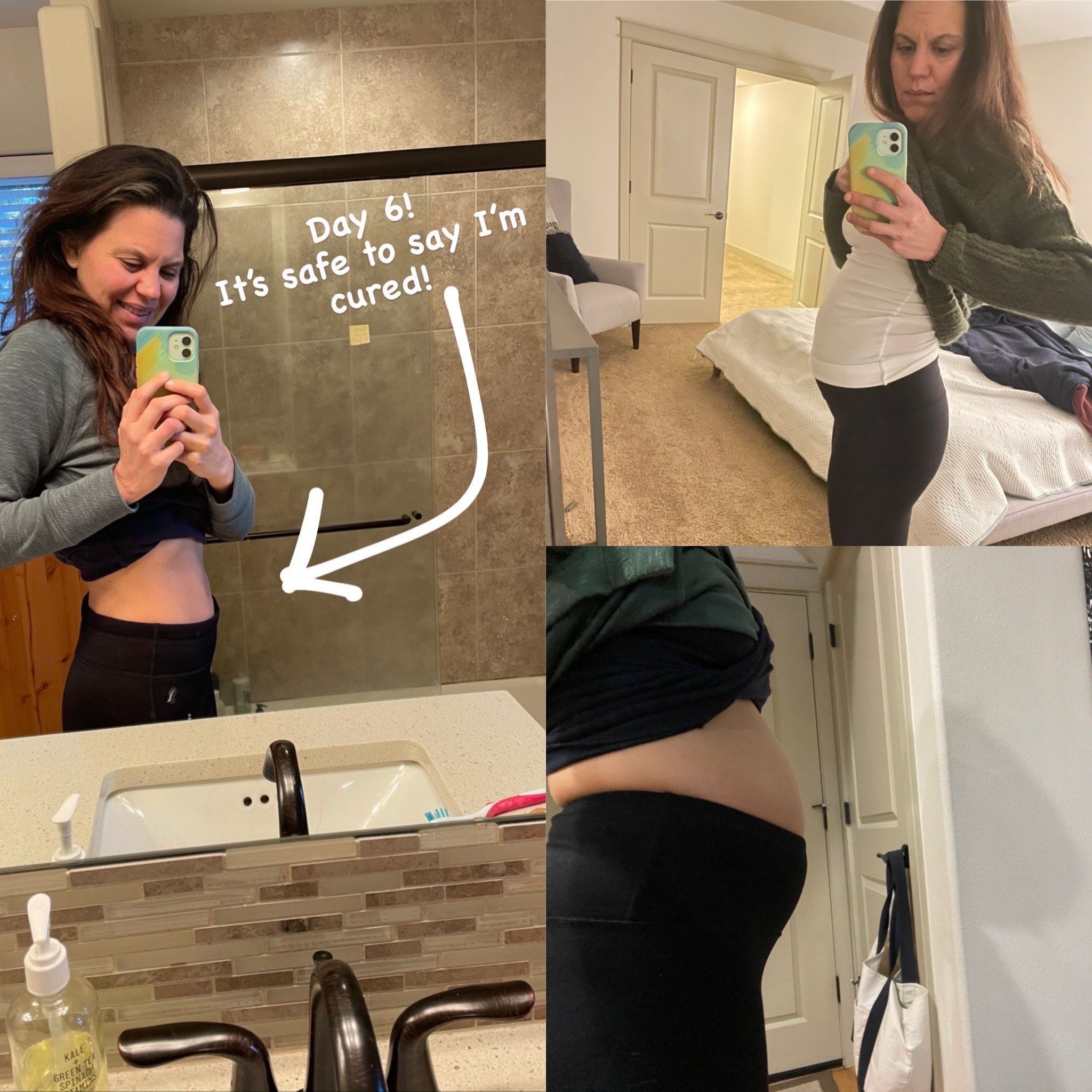 According to Johns Hopkins, the causes of constipation are medications, lack of exercise, not enough liquids, not enough fiber in the diet, IBS, ignoring the urge to have a bowel movement, lifestyle changes (e.g. travel, pregnancy, old age), problems with intestinal function, and use of laxatives.

I tracked my fiber and found I was eating well over 30g of fiber PER DAY.

I was also drinking a minimum of 8 glasses of water (I set an alarm to drink an 8-oz cup every hour) walking at least one hour a day (3-4 miles) plus regularly taking yoga and dance classes on zoom.

I also wasn’t traveling or pregnant, I definitely wasn’t “holding it”, and I wasn’t on any medications.

This left me with what? Problems with intestinal function?

Except I had a colonoscopy, which was normal. I had also been seeing a colon hydrotherapist every couple of weeks to remove my impacted waste, and she assured me each time my bowel function was terrific.

I read 14 different books on “gut health” including The Good Gut by Erica & Justin Sonnenburg which I think is #1 the best book on this topic and Fiber Fueled by Will Bulsiewicz which I feel is second best (and also more plant-based/vegan specific).

Point is, EVERY BOOK said to eat MORE fiber and eat/drink fermented foods like kefir, yogurt, miso, kombucha, sauerkraut, kimchi, and so on for gut health and constipation relief.

Let me tell you, I was pounding kombucha and kefir water like a champ. I was also eating loads of plant-based yogurt and fermented foods. My diet was primarily raw vegetables with a few raw fruits, small amounts of beans and lentils plus baked potatoes (to maximize my fiber).

and yet I was getting sicker and sicker.

Eventually, my abdomen became so large my friends and family stressed concern.

After an exhaustive amount of research and “thinking outside the box” I finally found my cause.

Here are a few key facts you need to know:

My GI explained it to me like this: Because I (or anyone on a mostly whole foods plant-based diet) consume so much fiber, that causes even more fermentation and bloating. “A high fiber diet is great IF you’re not already constipated,” he said, “adding fiber on top of constipation, however, is asking for extreme bloating pain.”

My GI also said eating and drinking all those fermented foods made it even worse. I already had a lot of fermentation going on (that’s what the bloating and distension is) I didn’t need to add MORE of that.

Bottom line: My high fiber “good gut” diet was a part of the problem.

HOWEVER, my GI didn’t recommend a low fiber diet to me; he noted that too would make things worse.

Interestingly, my colon hydrotherapist had made similar statements to me previously. She pointed to all the yeast (foam) coming out in the waste tube. In fact, over HALF of the tube was foam like you see on top of a beer. You shouldn’t have ANY foam!

She said to me, “Wow you have a lot of yeast and fermentation! No wonder your belly was so big. You should stop eating fermented foods and foods that easily ferment for a while.”

To my total and complete surprise, they both also asked me to stop taking my pricey probiotic.

Like the fermented foods, this was making the situation worse, they said.

My GI also scheduled me for a colonoscopy, out of an abundance of caution since my H pylori infection was rather severe and I’d been having these issues for over two years. He also thought it was the only way to stop my constipation cycle.

Here’s how you know I was truly constipated:The medicine for the colonoscopy prep did not work.

All day long I was looking forward to my “pooping safari” (finally emptying my bowels) except nothing happened. I waited two hours and called the emergency number. The doctor on call had me take the second dose. That still didn’t work.

The on-call doctor then made me do two rounds of enemas in the middle of the night (a new and not pleasant experience for me).

THAT seemed to shake some things loose, but I showed up for my colonoscopy not sure I’d actually be able to get one.

Fortunately (?) they were able to clean me out while I was asleep.

For the next week or so I felt great. Being less aggressive about my fiber intake, forgoing the fermented foods, and ditching my probiotic seemed to help.

Then my stomach ballooned up again.

At this point, I became deeply depressed and started to wonder if I could continue to live like this…

Talking things out with a close girlfriend, we realized the only thing that had changed was I had resumed taking my vitamins after the colonoscopy.

(For three days prior to the colonoscopy I was told not to take anything, and then I’d forgotten to start again a few days after).

Background:About 3 years ago I experienced massive “burnout” from years of workaholism. My 80-90 hour work weeks without breaks caught up with me.

My NP diagnosed me with “adrenal fatigue” (HPA Axis dysfunction) and my “regular” doctor said my thyroid hormones were slightly out of whack. I wasn’t willing to take medication, so both doctors suggested supplements (plus quitting my job and otherwise moving at a slower pace) to help repair my body without medication.

Initially I resisted taking supplements, too. I had a long standing personal belief that “food is thy medicine” and absent emergency nutritional deficiencies or some other serious limitation, it is best to get the goods directly from nature.

Yet I was also I was scared I might cause long-term consequences if my hormones didn’t re-regulate and I was desperate to feel better, so I caved and took a handful of supplements most people are prescribed (e.g. Vitamin D, Omega-3).

THE SUPPLEMENTS CAUSED MY CHRONIC CONSTIPATION.

Within days of stopping the supplements, I was spontaneously healed.

I’ve subsequently spent a great deal of time researching and have learned there is a good size body of evidence that several supplements lead to constipation or decreased bowel motility or slower bowel transit.

SUPPLEMENTS THAT CAUSE CONSTIPATION

If you are taking any kind of vitamin or supplement, and you have my symptoms or some other mystery GI issue you can’t seem to pinpoint, consider doing an online search for “vitamin name + constipation” and see if any studies or articles from trusted sources (e.g. Healthline) come up.

It’s only what I found during my own research and reading about supplements and constipation.

For example, when I searched about NAC, I found this study on “Adverse reactions associated with acetylcysteine” which lists constipation. It’s also important to see the dose amount used in the study. A study may say “only high amounts of this supplement cause constipation” but what do they consider “high” your dose, even if it is less than what your doctor or the bottle recommends, may still be considered “high” by the standards in the study.

I also want to add that I spent an incredible amount of time researching the supplements I took. I made sure they were vegan, free of common allergens, from a reputable company, organic and fair-trade where possible etc. etc. Basically the supplements I took were the cream of the crop and some of the most expensive supplements on the market. I was paying around $120/mo for my supplements.

Yet NONE OF THAT MATTERED. If “Vitamin X” causes constipation, then it really doesn’t matter what the capsule is made from or the source it is derived from.

One thing I found digging deep in the research on my hormonal issues was how constipation (and hormone therapy) is a common cause of constipation, but that is not regularly disclosed to women.

It is also worth noting that having hormone issues can also cause constipation so it is worth getting a full thyroid panel and other bloodwork to rule that out as a cause, especially if you are a woman.

CONSTIPATION CAN BE LIFE-THREATENING

If you watch ALONE (on the History Channel), you might recall a contestant from a recent season had to leave because of their constipation and the toxins caused by it. She (the constipated woman) became very ill.

CONSTIPATION CAN CAUSE DEPRESSION

There are loads of studies on this. Pooping makes everyone happier.

If you are vegan, plant-based and have the bloating and constipated like I did:

When I was really backed up, I would do a saline enema, or preferably, see my colon hydrotherapist to get flushed out. I simply could not go any longer being so impacted (2-4 pounds of waste was removed each time).

My GI prescribed taking Miralax twice a day (AM and PM) for two weeks to get my system running again.

Once things were “clear” I was also prescribed psyllium husk, which causes mucous so things, umm, slide out and don’t get stuck.

It tastes awful and the texture is like chia seeds (a.k.a. frog sperm) but whatever it takes guys!

NOTE: THIS IS DIFFERENT THAN MILD BLOATING AND GAS.

What I’ve described here is not ‘typical’ bloating, gas, or GI upset. (See pictures above). It is EXTREME.

If you are relatively new to a plant-centered diet, you may experience some gas and bloating andthat is normal.

TIPS FOR HELPING REDUCE GAS AND BLOATING ON A VEGAN DIET

Thanks to the hundreds of people who have messaged me since my original posts to share your stories with me. I am so glad my story can give you answers and hope and hugs to all the people who shared their own recovery stories with me.

TRUST YOUR BODY. TRUST YOUR INTUITION. BE YOUR OWN ADVOCATE.

10 Types of Lilies to Fill Your Garden