These Baileys cheesecakes feature a simple and totally from scratch chocolate cookie crust with a creamy, boozy cheesecake filling! They can be made with all-purpose flour, gluten-free or whole wheat flour.

I don’t have many St. Patrick’s Day recipes, but I’m trying to remedy that this year. First up, we have these amazing, quick and easy Irish cream cheesecakes! If you don’t have any cream cheese on hand, try these Baileys Brownies instead. 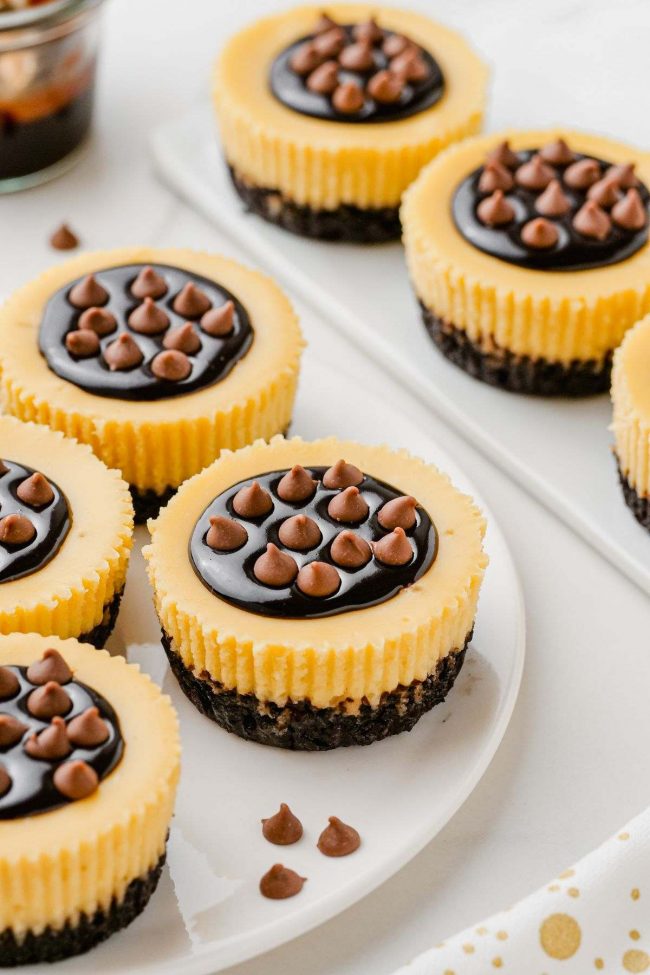 You just need basic stuff for these cheesecakes. And some Baileys! 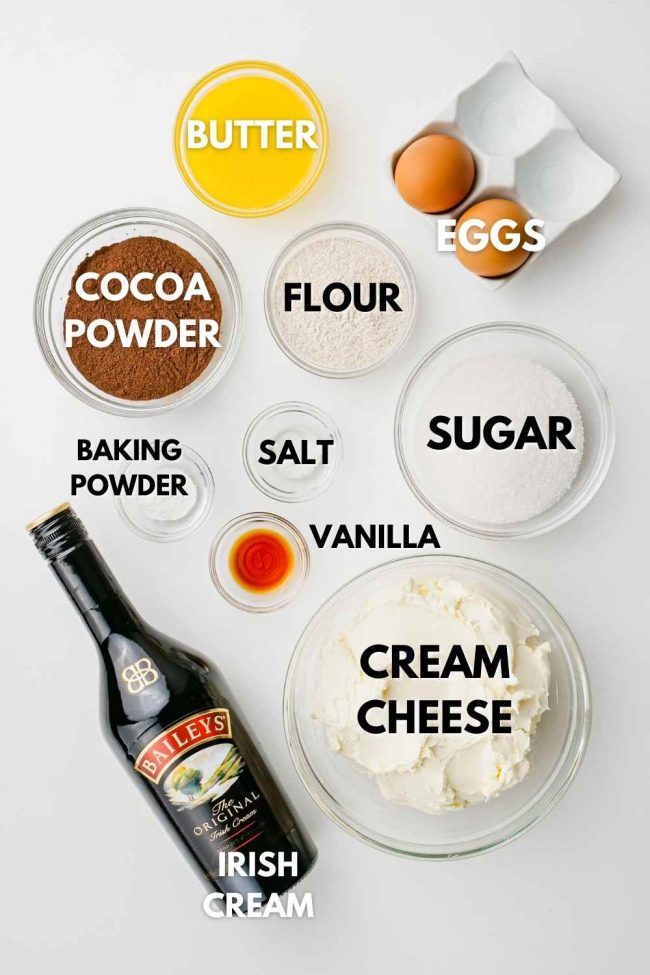 I really, really love the crust in these mini Irish cream cheesecakes. You just mix together flour, cocoa powder, sugar, salt and butter. So easy.

I didn’t experiment with coconut oil for a dairy-free version because the cheesecake is full of dairy anyway, but I’m pretty sure using the same amount wouldn’t work. You’d need to reduce it but since I haven’t tried it, I can’t say for sure how much you’d need.

It tastes exactly the same as a regular Oreo cookie crust, if not better, and it doesn’t have any funky ingredients. 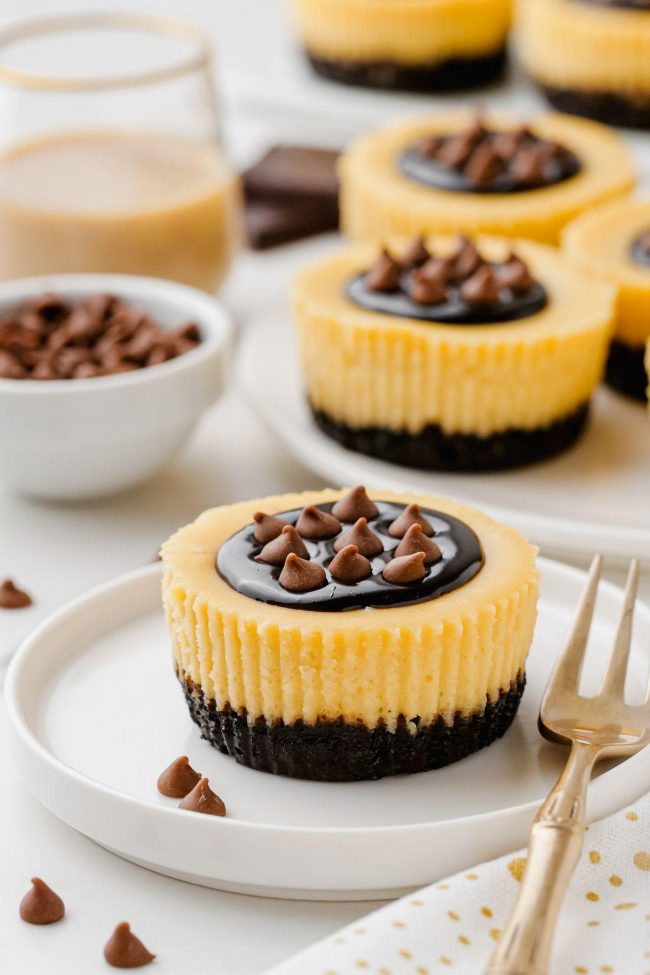 Because I was so excited after the whole wheat version came out, I decided to try a gluten-free version with buckwheat flour (which is also 100% whole grain, by the way!), and it was just as delicious.

You need to make sure to pick a brand that’s gluten-free. Buckwheat is naturally gluten-free but sometimes gets contaminated during processing.

There were a few times that I made these cheesecakes to give away, but they were so delicious that I couldn’t let go of them. Then I ended up making my usual go-to, these almond flour brownies or gluten-free brownies. 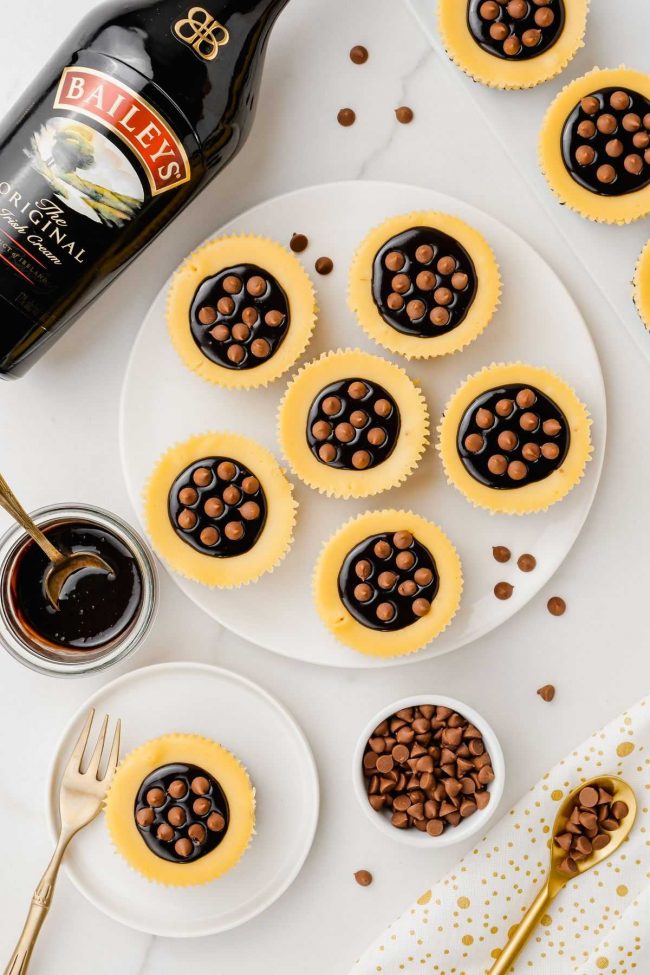 According to Baileys, “The ingredients used in Baileys are gluten-free. On the basis of this, and to the best of our knowledge, there are no traces of gluten in Baileys. As we are not qualified to give medical advice, persons requiring a gluten-free diet should consult their medical adviser before consuming Baileys.”

So they’re clearly being cautious.

Why they’re being cautious is because whiskey is made from barley, one of the gluten-containing grains. However, when whiskey goes through the distillation process, all of the gluten is basically destroyed.

According to Beyond Celiac, “Pure, distilled whiskey (or whisky), even if made with wheat, barley, or rye is considered gluten-free. Most whiskeys are safe for people with celiac disease because of the distillation process.”

So it’s safest to talk to your doctor. I can tell you that Baileys Almande is definitely gluten-free and will work in these cheesecakes.

I used to recommend Carolans, as they previously wrote that they’re gluten-free on their website, but they no longer have that listed there. So I’m not sure what that means.

They apparently only use gluten-free ingredients, like Baileys, but I’m guessing they don’t feel confident declaring it as gluten-free, the same as Baileys. 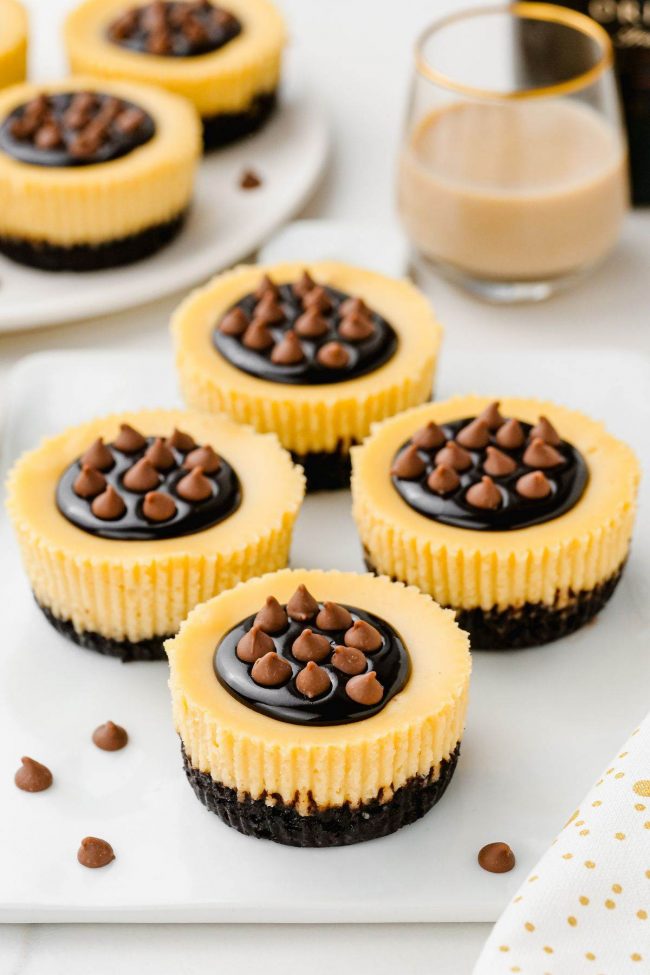 I thought about topping these off with some whipped cream, but then I remembered this Baileys fudge sauce that I saw over on Cupcakes & Kale Chips. It was incredibly quick and easy to make and half of the recipe was just enough.

It looks great and I love that it’s sweetened with brown rice syrup or maple syrup! You can also use corn syrup if you prefer.

If you use maple syrup, it doesn’t taste like maple, at least if you use a syrup that’s lighter in color. I haven’t tried honey for that reason. I figured that the honey taste would be quite strong and honey + Baileys doesn’t sound like the best combination to me. 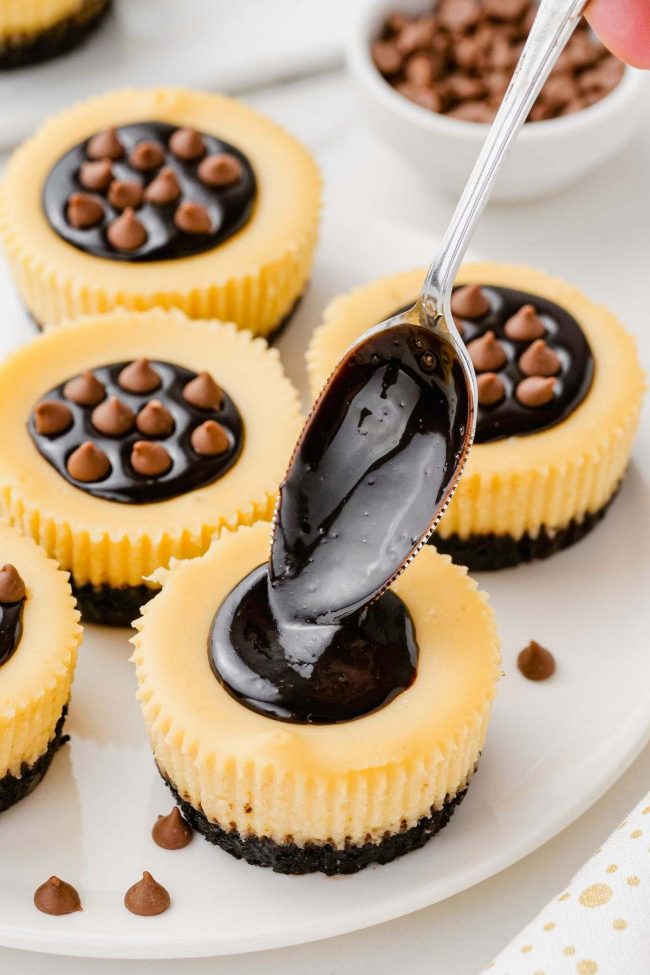 Can I just make one big cheesecake?

The crust doesn’t work in a pie pan so that’s a no. I poured in the filling, anyway, on my messed up crust and baked it and the texture wasn’t right.

I’m not quite sure why that is, but it didn’t work.

Can I freeze these Irish cream cheesecakes?

Yes! You can even freeze them with the fudge topping.

Depending on your freezer, you may be able to eat these Baileys cheesecakes straight from the freezer. But you’ll likely need to let them defrost for 20 minutes or so at room temperature. 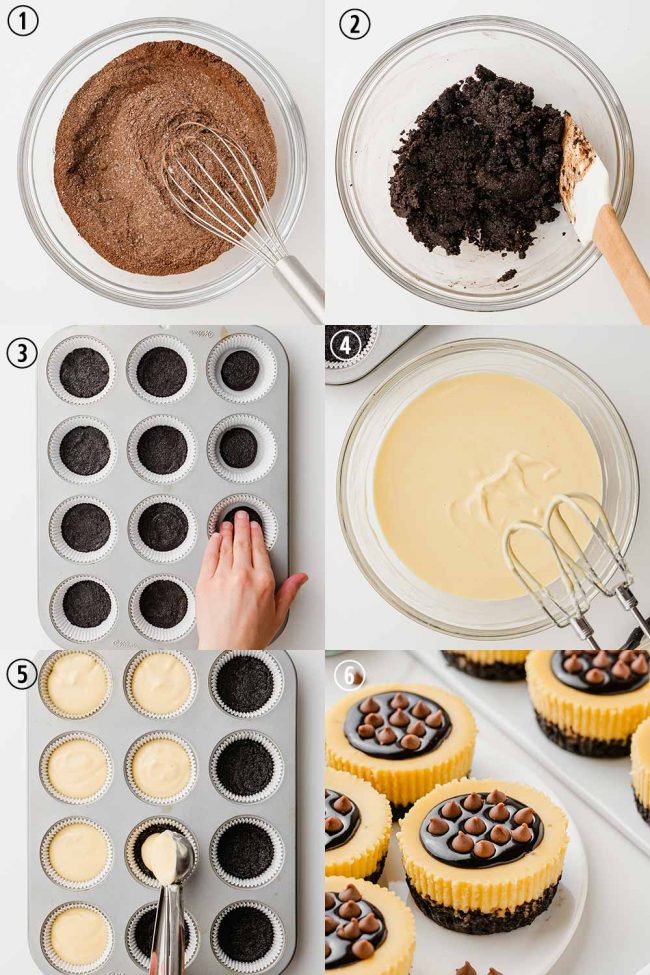 I hope you’ll enjoy the cheesecakes! If you make this recipe, I’d love to see pictures of your creations on Instagram, Facebook and Twitter! Please hashtag them #texanerin so I can find them. 🙂